Trekking in the Pindus Mountains of northern Greece 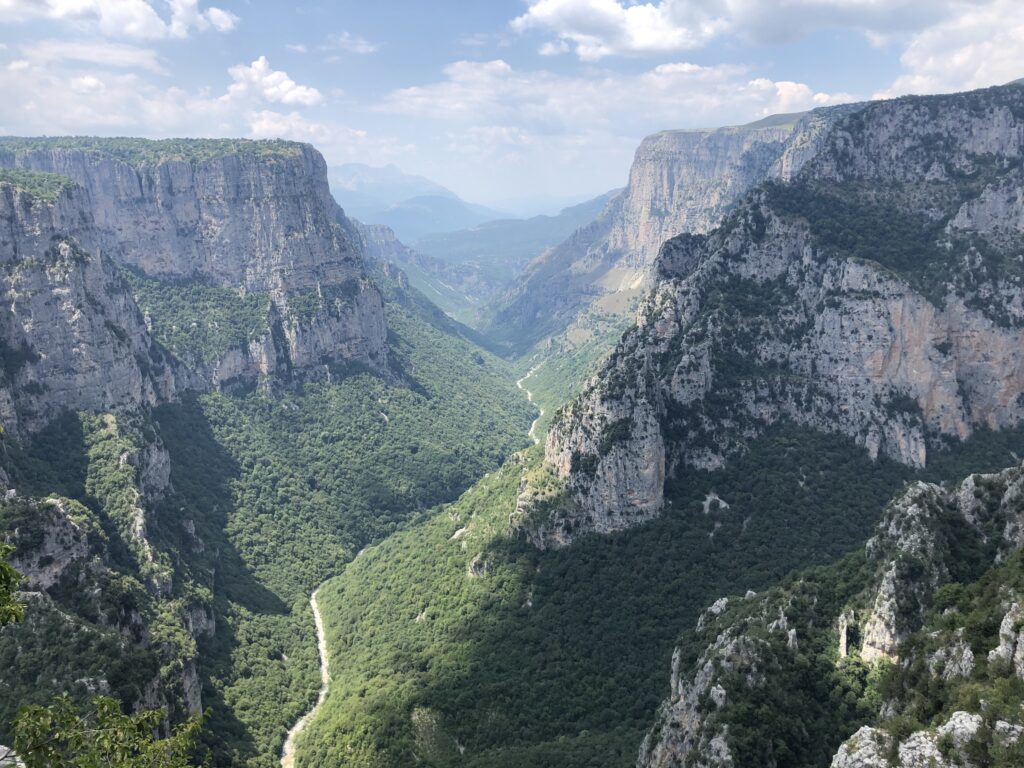 The original plan had been to visit Albania, North Macedonia and Kosovo. When reading about hiking in Albania, I discovered that just across the border in northern Greece are the Pindus Mountains and thus when travel to Albania wasn’t possible, we decided to head to Greece. Like many others I suspect, the words that first pop in to my head when I think of Greece are islands and beach, followed closely by feta! But, I now know that Greece is in fact the third-most mountainous country in Europe.

Covid arrival protocols were for random Covid testing on arrival with those tested required to wait up to 24 hours to hear if the test was positive. No news was good news in that you only heard if you had tested positive. We flew into Corfu and it was an anxious night as we enjoyed a few delicious beers hoping our phones wouldn’t light up with a message from the Greek government. We had heard nothing by morning and so we hopped on the ferry to the mainland, docking in Igoumenitsa where we picked up our rental car.

We headed to the village of Metsovo for a wonderful lunch before continuing to Vitsa, the hike’s starting point. A search on Booking.com and a quick phone call led us to En Chora Vezitsa where under the shade of a beautiful tree and whilst enjoying our first Mamos beer, we discussed the plans for our week’s walking with the owner Tasos. He was so excited to have guests planning a multi-day hike and we settled on a circular five-day trek.

After a wonderfully generous breakfast, we set off in fantastic weather and it was a gentle 30 minutes to Monodendri, where we picked up a few snacks and admired our first view of the Vikos Gorge from the 600-year-old Ayias Paraskevis monastery. With a depth of 490m and a width of just a few metres at its narrowest point, the Vikos Gorge is recognised as the world’s deepest gorge relative to its width.

We dropped down and being on the gorge floor really gave us a sense of its size. Despite being in the shade, it was still incredibly warm, and we enjoyed our lunch and a refreshing swim at the Angastromeni Springs.

We continued through the gorge for a further two hours before starting our climb out. We enjoyed another wonderfully refreshing swim at the icy Voidomatis Springs before the final sweaty 50 minute climb to the village of Vikos was rewarded with a sunset beer in Kostas’ magnificent herb and vegetable garden overlooking the gorge. Beers were accompanied by a salad lovingly prepared by his wife, Dora.

The following morning, we dropped back into the gorge before a steep climb up to the beautiful stone village of Mikro Papingo with the views now behind us. We enjoyed a delicious breakfast of local yoghurt with honey and granola and a strong Greek coffee before setting off under the blazing sun. A swim at a natural rock pool provided very brief respite before we started the steep climb to the Astraka Mountain Refuge.

Climbing 900m over six km in three hours, we were initially slightly shaded walking through forest before it cleared to an expanse of lush grass with a number of towering peaks framing the view. Shelters every 30 mins provided a welcome brief respite from the heat.

Tasos had kindly called the refuge to confirm our booking but we weren’t done for the day and after a mars bars and a few biscuits, we set off for one final climb to the Drakonlimni Lake. While the lake wasn’t particularly stunning, it was in a fantastic location which felt very remote. Wild mountain goat (Chamois) casually sauntered up and down the perilous cliff edges while Alpine Newt swam in the lake.

After walking 27km and climbing almost 1500m, the cold beer at the hut was magnificent! We enjoyed a few games of cards and after a hearty bowl of spaghetti bolognaise we were soon in bed and fast asleep.

The following day we crossed the Tymfi Range on an epic path that hugged the side of the gorge. Eventually we dropped steeply down the side of the mountain before a final 40 minute descent into the village of Tsepelovo. We headed for the square, which like Vitsa was built around the village’s oldest tree, and it’s a wonderful way to end a day’s walking with a cold beer in the shade. Tasos had put us in touch with his friend Kostas who not only ran the delightful Hotel Kadi but was also the region’s local policeman.

After a few too many ouzos at the village’s single bar watching the mighty Reds lift the trophy, it was a later than expected start the next morning. We headed towards headed Kapesovo and after a snack on a beautiful stone bridge just outside town, we started climbing the 1,200-odd stone steps to the village of Vradeto. Before a road was built in 1973, these steps were the only way to access the village. Each turn brought a more impressive view as we gained height and one could only wonder how on earth these steps had been built.

Today the village is abandoned but there was one coffee shop open and we sat under a shady tree enjoying a cold frappe and a piece of brownie made by the owner’s daughter. It was another 30 minutes to the Belois viewpoint, without doubt the most spectacular of our trek.

We retraced our steps, literally, and dropped down through the forest to our final village of Kipoi. Kostas had sent word three South Africans were on their way so the lady tending to her garden at Machalas was expecting us, as was the gentleman serving at the taverna across the street (which it turned out she also owned). We enjoyed another divine dinner before Kostas, and his supervisor, joined us for a beer after finishing work. The hotel had a beautiful courtyard and garden and these villages were an unexpected highlight of the trek.

The final day was a short one as we headed back to Vitsa, crossing several centuries-old stone-arched bridges en route. Over 150 were built to connect the almost 50 villages in this Zagori Region. 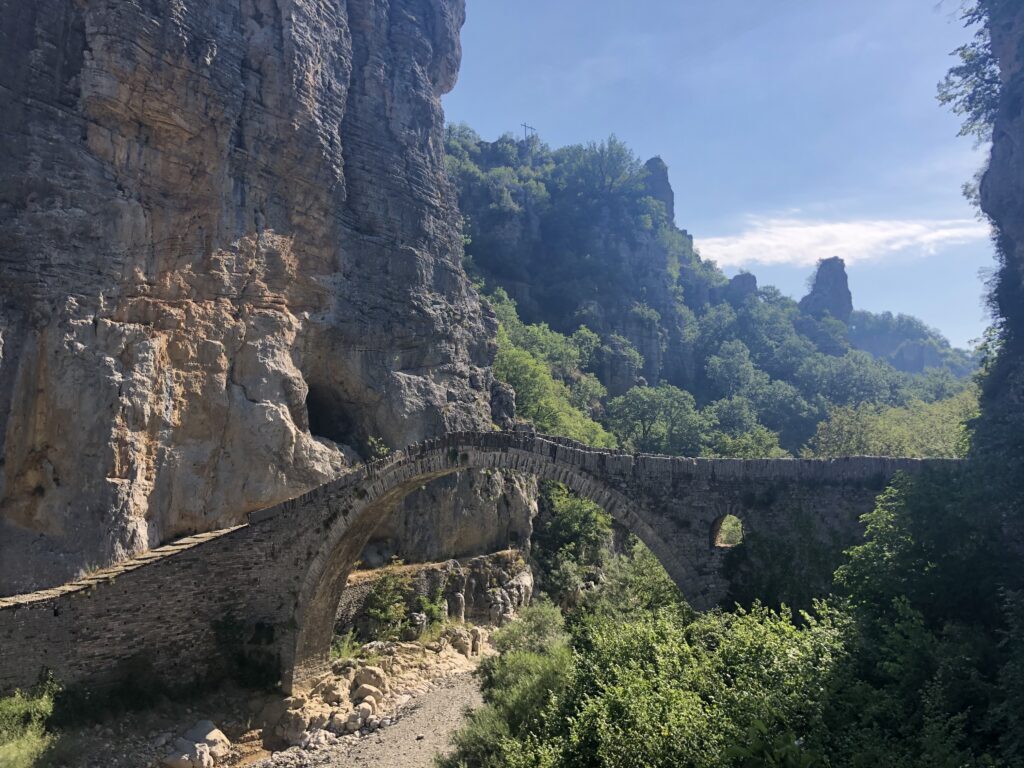 Back at Vitsa we enjoyed a final Mamos in the shade before deciding it was time to put our feet up on a beach for a day or two!

Detailed Trek – all distances as per my iPhone

We were walking on the Epirus trail, which is very well marked – look out for the red markers on trees and rocks. We had maps.me as a back-up and you can also buy a full-size map from Tasos.

Shops were limited in the villages but we were able to pick up snacks in Monodendri and Tsepelovo. Otherwise we survived on leftovers from dinner/breakfast. You could always order an extra meal at dinner as lunch for the following day.

We all carried 3l of water and it was easy to fill up at rivers or in villages with no purification necessary. Always fill up when you have a chance. 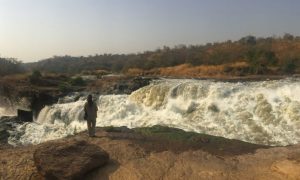 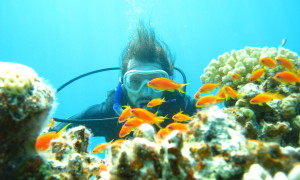 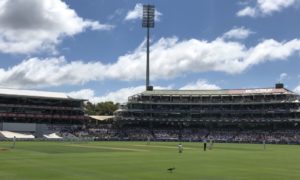 Back at Newlands to watch Test cricket: The Proteas vs. England 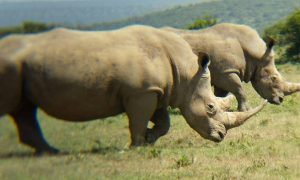 On safari with the rhinos in Kenya