Trekking in Tanzania up Mount Meru 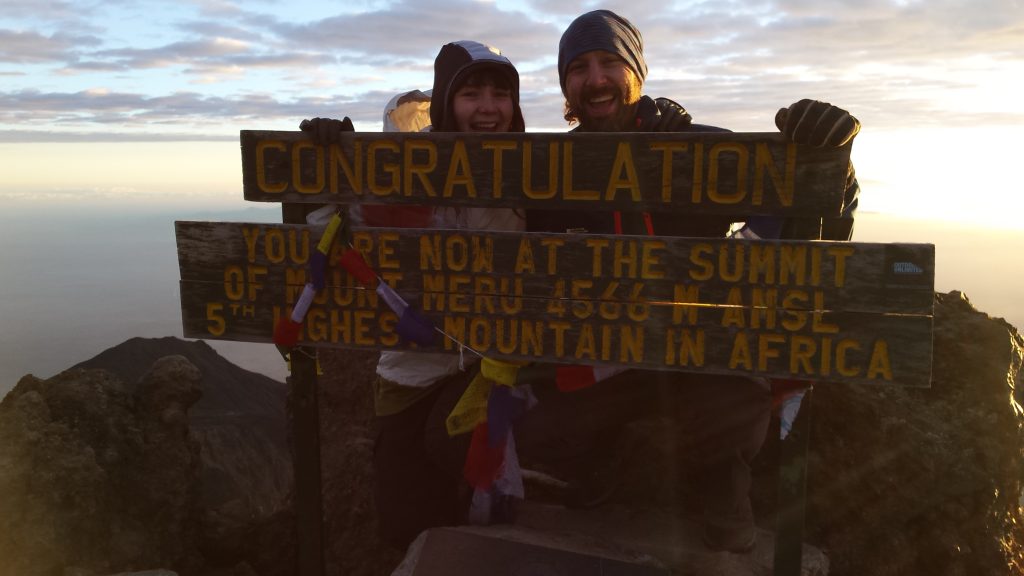 When one thinks of trekking in Tanzania, you more than likely think of Kilimanjaro, Africa’s highest peak and the world’s tallest free-standing mountain. Having just enjoyed an unforgettable safari in northern Tanzania, the steep price to climb Kili meant it was out of our budget but a friend recommended climbing Mount Meru, Africa’s fifth highest summit. Having climbed both, Jim said he actually enjoyed Mount Meru more, one reason being how quiet the trail is, and given that we were very keen to do some trekking thought it sounded like an excellent option.

We had originally hoped to trek on our own to save costs, reading in the Lonely Planet that this was very doable. Our visit to the tourist information office in Arusha to garner more information quickly put paid to that as we were told rules now stipulated you had to climb with a registered company. And so it began …

Having told one person as we entered the tourist office we were here for information on Mount Meru, upon our exit some half a dozen company reps appeared. Word was spreading quickly and with few people trekking Meru, we felt extremely wanted! To cut a very long day’s discussions extremely short, we eventually found a company within our budget (though the budget allowed for only three days, not four as was our initial preference) and were instructed to be ready for collection at 9 am in the morning.

After an hour’s driving from Arusha, including a detour to the local village to pick up our guide’s passport (he had been out the night before and forgotten to take it!), and completion of the necessary paperwork, we were led around noon off by our ranger, Andrew – the perfect time to be trekking in summer in Africa! It is mandatory to be led by an armed ranger, apparently for one’s own safety and as protection form the animals though having seen very few, I think it is more for job creation. Nevertheless, Andrew was very knowledgeable and lovely and we enjoyed walking with him and the rest of our group (some six people). 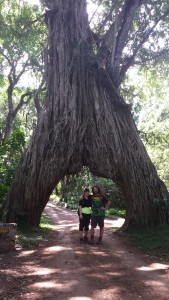 The first day saw us take the longer route, winding less steeply we were told, up a km to arrive some five hours later at the Miriakambe hut, 2,500m. The first two hours are on a road, which is not great and super-hot, but that becomes forest quickly and it was a steep first day’s trekking in hot weather. After a long afternoon and with a further two days ahead of us, it was a very quiet new year’s and we were asleep before midnight!!

The second day saw us climb another km in some four hours to Saddle Hut. The first hour is particularly steep but after that it is easier going and half way up is a little picnic spot with a nice view over Mount Meru – a great place for a morning snack. We also finally spotted a few animals, including the awesome looking white-tailed Corbus monkey. The last stretch was sadly through an area devastated by fire – Andrew informed us the weed plantation down in the valley had caught alight – though thankfully there were signs it will recover. We summited Little Meru for acclimatisation, a quick 90 minute return trip, and were in bed by 8 as a long day awaited us.

We were up just before 1 am to depart on the hour for our summit attempt. It was a steep, tough and cold climb that took almost dead on five hours, arriving just after six as the sky started to turn orange. The summit trek starts fairly gently, zig-zaging some 300m up to Rhino Point – so named because legend has it a rhino once attempted to summit but fell off the edge here.  From there you descend ever so slightly before clamouring sideways over rocks with support chains, following which it is all up – initially a steady and steep incline on loose scree and then climbing over rocks for at least an hour.

We could see the sky turning orange as we started on the final push before losing sight of the horizon as we rounded the back of the mountain. It’s then one final steep scramble over rocks for another few metres before you reach the top and as we climbed over that final rock, a beautiful orange sky came into view.

As we sipped delicious tea and enjoyed some pancakes, the sun popped its head out and what a sight it was to see the sun rise over Kilimanjaro on a beautifully clear and cold 2016 morning.

It was twice as quick coming down and we could now see what we had walked up … not just the false peaks and rocks we had climbed over, but the walk along the crater rim. Perhaps walking up at night is not the worst thing in the world as all you have to focus on is your feet! 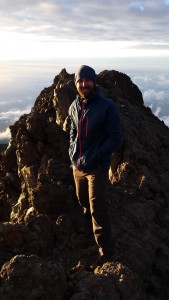 We were back by half nine for a much needed breakfast before the long way down began … it took two hours until Miriakambe hut, the last very steep bit really hurting, and then a further two and a bit hours through the steeper forest route home. The final 100 m took us past a huge herd of resident buffalo and we arrived, rather knackered and sore, back to the main gate around 4. 30 pm.

It was certainly a very long day and in hindsight, a ‘what should have been nine but as expected 12’ hour bus back to Dar es Salaam the next day was not the smartest idea! Never mind – we soon headed over to Zanzibar to do very little and after a day gingerly walking around Stone Town were soon back to normal.

We thoroughly enjoyed this trek and found Mount Meru to be both super rewarding trek and extremely beautiful. We also  loved how quiet the trail was. If budget and /or time and / or preference don’t allow for climbing Kilimanjaro, this is a wonderful alternative. And if you are planning to climb Kilimanjaro, trekking Mount Meru first would be fantastic preparation

Trekking in Tanzania is certainly not cheap. Park entrance fees are expensive, US$45/day for Arusha, while the huts cost $30/night. Add in the ranger fee, an emergency evacuation fee plus transport and the mandatory guide and porter fees (as noted above, you are not allowed to trek independently) and the best deal we could find was $150/day/person. While eating, sleeping and getting around Tanzania is very affordable, the activities are all charged in US $ and thus extremely expensive.

You could break up the long third day by spending another night at Miriakambe hut but it is certainly possible to do in three if you don’t have the budget for a fourth day so don’t be put off. If you took the extra day, your ‘package’ would very likely include a safari round the Arusha National Park once you had completed the trek, which would be a lovely combination of activities to do (especially if you were not planning to spend more time on safari).

Camping with elephants in the Serengeti 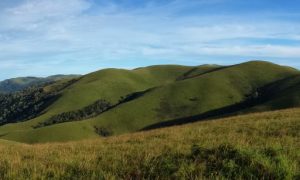 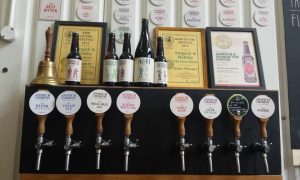 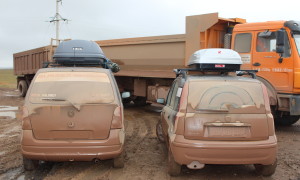 Tough driving through Kazakhstan and Russia 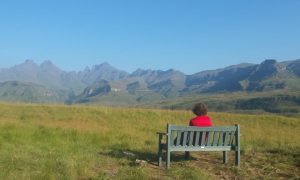 Hiking in South Africa in the Drakensberg